Back in 2016, a group of burners held an unofficial competition called the Black Rock City Ministry of Urban Planning to redesign Black Rock City, the temporary city built to hold Burning Man every year.

This was what my girlfriend at the time and myself came up with. She created the concept of a shell and put together some sketches while I filled in the details. The design goals were 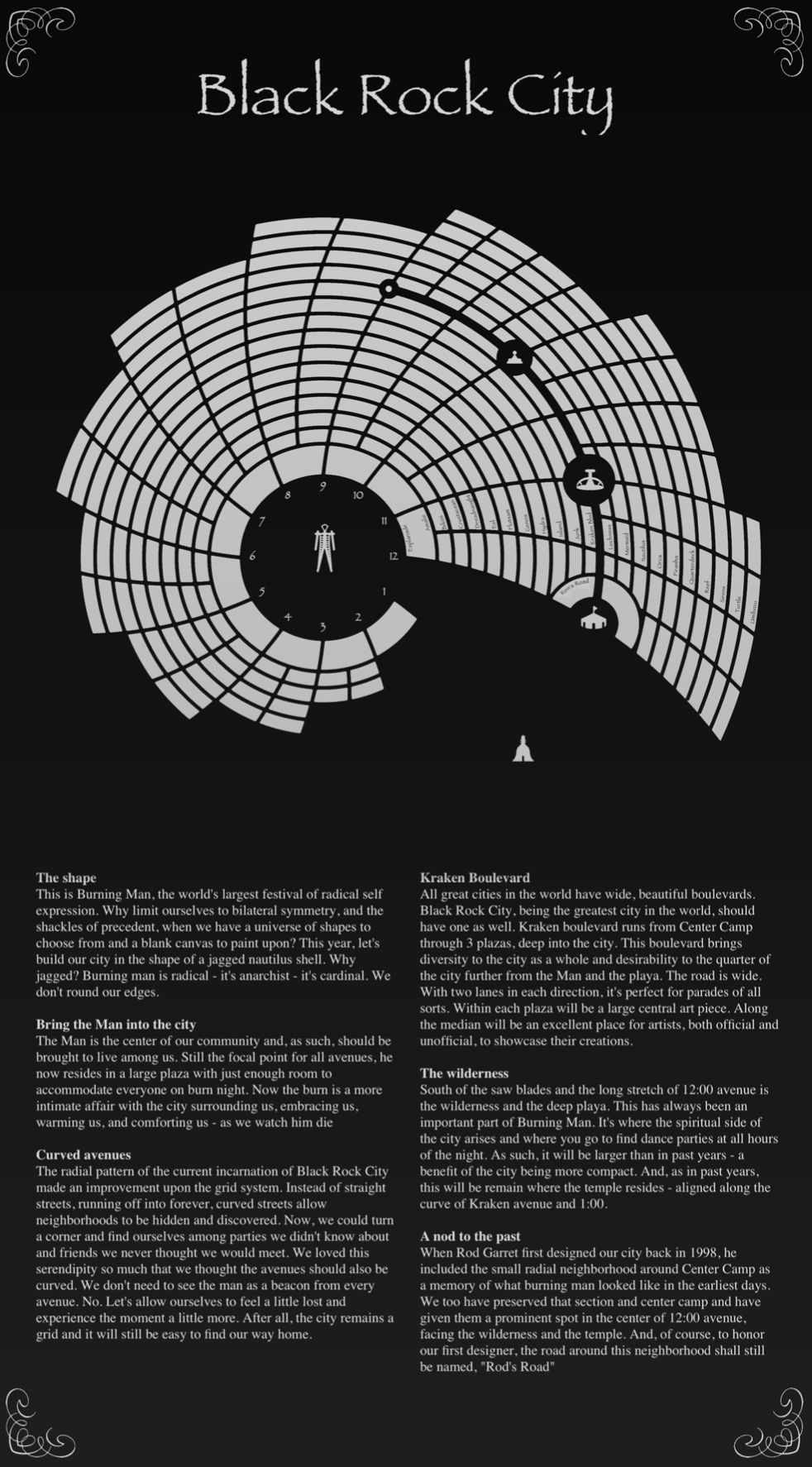 The text from the image

This is Burning Man, the world's largest festival of radical self expression. Why limit ourselves to bilateral symmetry, and the shackles of precedent, when we have a universe of shapes to choose from and a blank desert canvas to paint upon? This year, let's build our city in the shape of a jagged nautilus shell. Why jagged? Burning man isn't a smooth curated experience. It's an experiment in anarchy. We don't round our edges.

Bring the Man into the city

The Man is the center of our community and, as such, should be brought to live among us. Still the focal point for all avenues, he now resides in a large plaza with just enough room to accommodate everyone on burn night. Now the burn is a more intimate affair with the city embracing us as we watch him burn.

The radial pattern of the current incarnation of Black Rock City made an improvement upon the grid system. Instead of straight streets, running off into forever, curved streets allow neighborhoods to be hidden and discovered. Now, we could turn a corner and find ourselves among parties we didn't know about and friends we never thought we would meet. We loved this serendipity so much that we thought the avenues should also be curved. We don't need to see the man as a beacon from every avenue. No. Let's allow ourselves to feel a little lost and experience the moment a little more. After all, the city remains a grid and it will still be easy to find our way home.

All great cities in the world have wide, beautiful boulevards. Black Rock City, being the greatest city in the world, should have one as well. Kraken boulevard runs from Center Camp through 3 plazas, deep into the city. This boulevard brings diversity to the city as a whole and desirability to the quarter of the city further from the Man and the playa. The road is wide. With two lanes in each direction, it's perfect for parades of all sorts. Within each plaza will be a large central art piece. Along the median will be an excellent place for artists, both official and unofficial, to showcase their creations.

South of the saw blades and the long stretch of 12:00 avenue is the wilderness and the deep playa. This has always been an important part of Burning Man. It's where the spiritual side of the city arises and where you go to dance at all hours of the night. As such, it will be larger than in past years - a benefit of the city being more compact. And, as in past years, this will be remain where the temple resides - aligned along the curve of Kraken avenue and 1:00.

A nod to the past

When Rod Garret first designed our city back in 1998, he included the small radial neighborhood around Center Camp as a memory of what burning man looked like in the earliest days. We too have preserved that section and center camp and have given them a prominent spot in the center of 12:00 avenue, facing the wilderness and the temple. And, of course, to honor our first designer, the road around this neighborhood shall still be named, "Rod's Road". 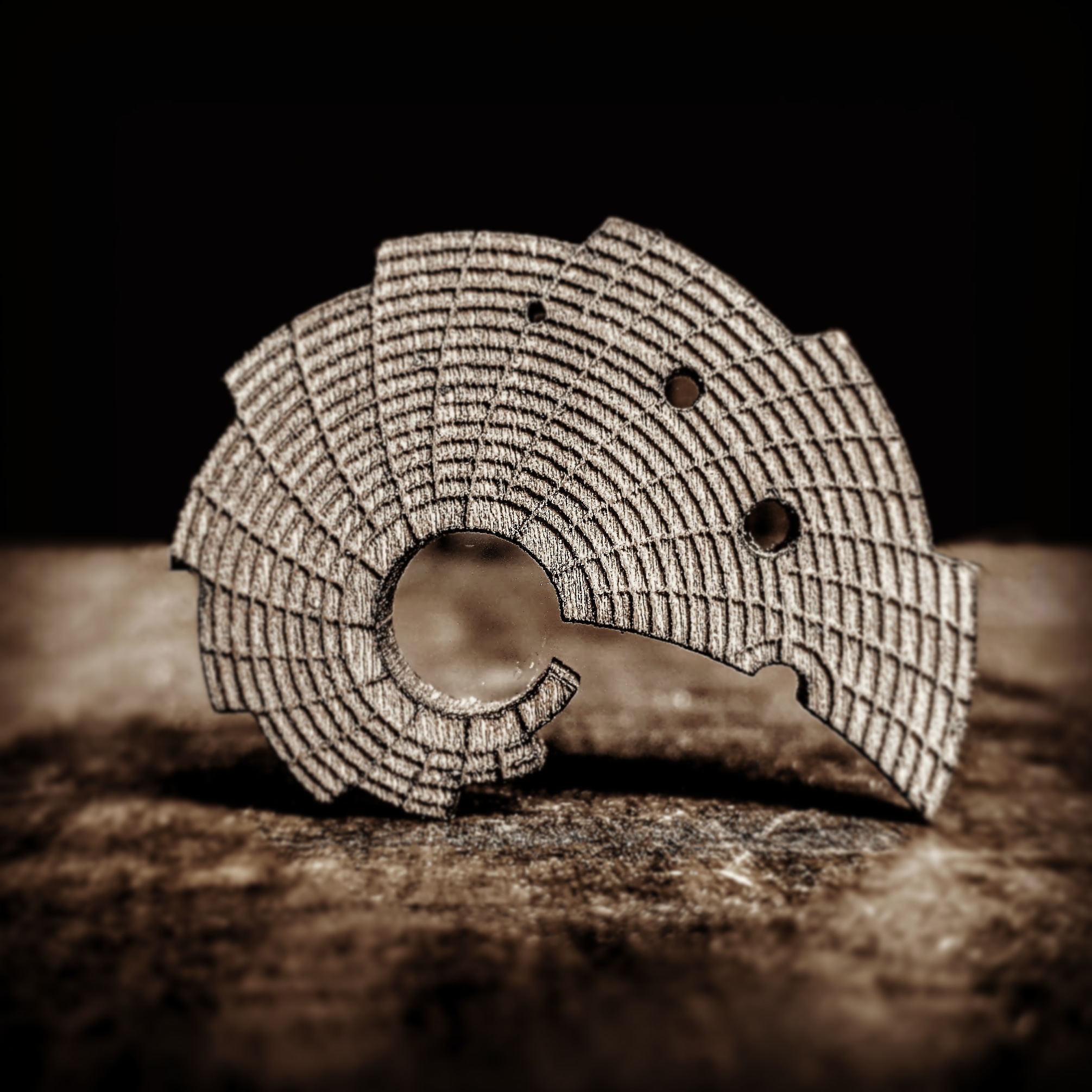