Over the past few days, I've been working on a small service to embed invisible watermarks in photographs. After several attempts to implement a few papers, I realized that the science isn't yet "good enough" for a real-world invisible watermarking service. In particular, watermarks from even the latest papers don't seem to be resistant to resizing.

Undeterred, I spent two days fusing different approaches into a more robust algorithm. At first, the results were promising. However, I soon ran into a stumbling block that caused me to question whether my approach would work at all. I then started to wonder how long this was going to take and whether it was worth the effort.

There is a saying in project management: "Fast, cheap, good. Pick two". In other words, in business, when building a project, the outcome can be:

This concept of trade-offs between three alternatives is a trilemma. Trilemmas are an interesting concept found across many different disciplines. Most well known are the trilemmas in macroeconomics and theology.

I believe my challenges with the invisible watermarking service were the result of a general trilemma for creative pursuits.

By trying to create a new invisible watermarking algorithm quickly, I was trying to do something that was fast, quality, and novel. 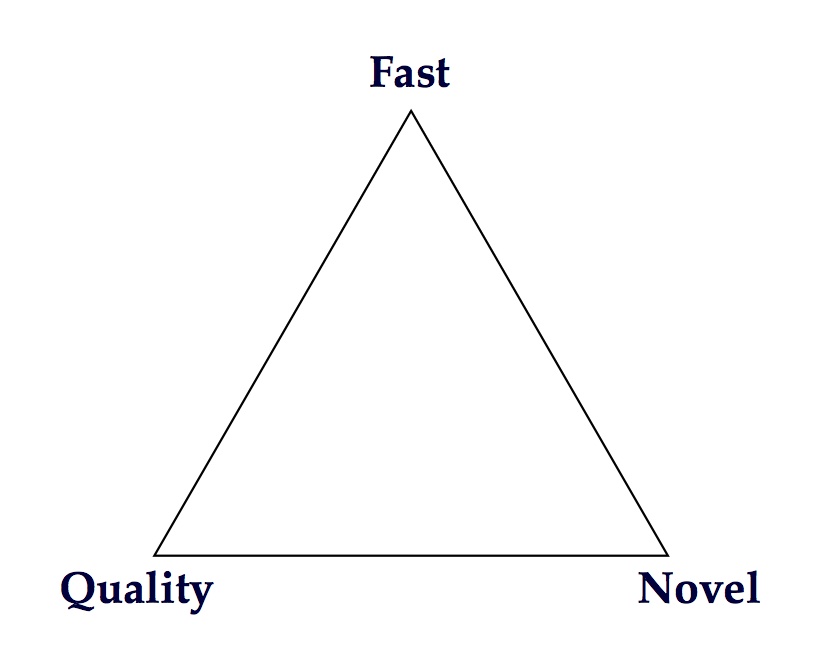 What is creative work?

When I say creative people and creative work, I am speaking broadly. Creative work is work that requires deep thought and produces original things. It is most often associated with artists, writers, or musicians but is also central to the work of scientists, engineers, architects, chefs, and many other vocations. For the purpose of this essay, it any work where a novel contribution is the goal or would be welcome.

I tend to place a high value on the "novel and quality" category. Others will choose different strategies for different reasons.

Cause of the trilemma

All creative people have the goal of generating novel, quality work. Most also want to create as much as possible in as little time as possible. Because there are often many people working on similar things, most novel things that are easy to create have already been created. In other words, in creative pursuits, there is very little low hanging fruit.

So far, I've presented the trilemma as if it were a set of distinct trade-offs. You can either work for years without recognition, come up with a lot of bad ideas, or never create anything original.

This is an oversimplification. 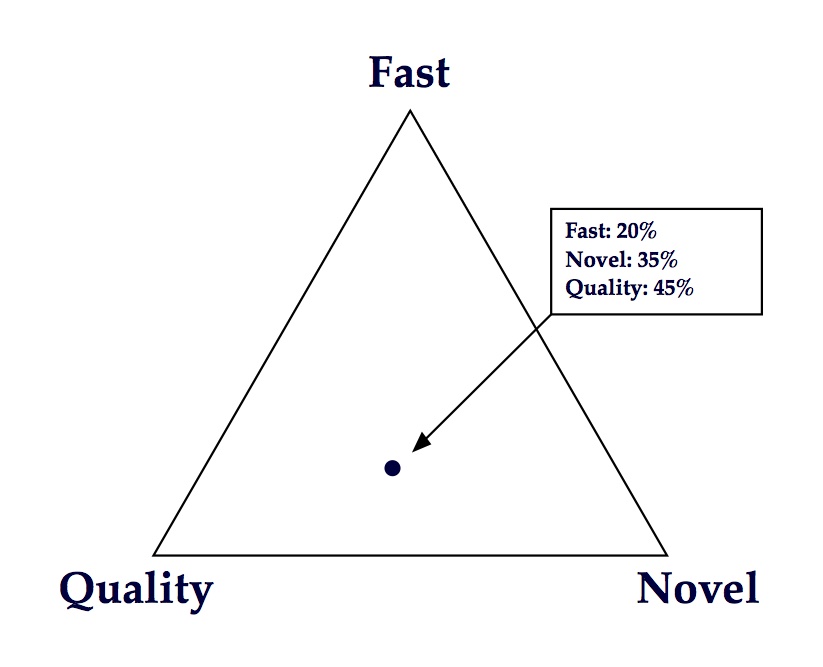 Trilemmas are useful because they are simple models. However, their simplicity tends to cover up the complexity of the real world. Like most simple models, the "fast, quality, novel" trilemma has several exceptions.

Exception 1. The role of luck

The majority of ideas are bad or have fundamental flaws that render them unworkable. A select few will be good. At inception, it's unclear which are good and which are bad. It's up to creative people to iterate on many ideas to find one that actually works. This is one reason why novel work takes so long. However, good ideas can appear at any time. It's just a matter of luck.

For example, incandescent (old-style) light-bulbs are simple devices. In essence, an electrical current runs through a material that heats up and emits light. In the mid-1800s, we knew that running an electric current through most materials would cause them to heat up and emit light. However, most materials do not make practical light-bulbs because they tend to burn up quickly. While working on the problem, Thomas Edison is quoted as saying, "I haven't failed -- I've just found 10,000 [materials] that won't work". While that quote is somewhat apocryphal, let's assume that Edison actually tried 10,000 different materials before settling on carbonized bamboo. If by luck, he had tried bamboo (or tungsten) sooner, he would have had a commercial light-bulb years earlier.

Exception 2: Experience can be a substitute for time.

Whether or not something is "fast" depends on how you look at it. Adept painters spend years developing their skill and style but only a few hours or days on each painting. Similarly, many professional mathematicians seem inexplicably brilliant. However, they have been doing math for their entire lives. When trying to be creatively productive, it helps to work in something you are already skilled at.

We would never expect Earnest Hemmingway to write technical manuals or Marc Jacobs to design single-family homes. Similarly, everyone has one or more skills that they have some experience in that they can do faster and better than others. By focusing on your strengths, you can more rapidly achieve the elusive goal of creating something truly novel.

The world of science, art, and ideas is vast and many niche areas are ignored. However, these are areas with less competition and lots of low-hanging fruit. Some people, for example, write books about wallpaper. Because not many writers bother with such seemingly niche subjects, it's easy to make a novel contribution.

There also tends to be plentiful opportunities in the boundaries between disciplines. How many scientists work in the cross-section of economics and cellular biology? How many artists make walking sculptures?

During the emergence of new technologies and mediums, it is easier to create novel things. In the early 90s, the internet was young and there was a lot of potential. An internet bookstore like Amazon, while executed well, was an obvious idea that someone would have built sooner-or-later. The same goes for a payment processor like PayPal or an encyclopedia like Wikipedia. For a while, just replicating existing business models online was enough to be successful.

Similarly, the emergence of cheap steel in the 1800s led to an explosion in architecture and industry. In 1874, the Strasbourg Cathedral was the tallest building in the world. This is especially impressive considering medieval workers started it over 800 years prior. For the next 57 years, with the help of steel, the record for the tallest building was broken 11 times. And steel was not just useful for tall structures. With steel, it also became possible to build long bridges, steam engines, and numerous other new things.

These periods of rapid homesteading follow the emergence of new paradigms. The tricky part of taking advantage of these innovative periods is identifying these promising paradigms in advance. While the internet and steel were game-changers, we have yet to see mainstream adoption of AR/VR technology or cryptocurrency.

Over the course of my life, I've spent a lot of time pursuing things that were wildly ambitious in retrospect. Looking back, these projects feel almost foolish - though they did teach me a lot. If I had understood this trilemma earlier, I might have saved myself some time and better applied my focus.